All eyes are on Brussels as the European Commission prepares to publish its long-awaited draft legislation on artificial intelligence (AI). The Commission’s stated goal is to turn Europe into a hub for developing advanced, human-centric, trustworthy AI. Given the transformative potential of the technology, the EU wants to ensure that AI is safe and respects fundamental rights. The Commission hopes to influence the evolution of AI developed abroad and at home. However, it must wake up to the fact that Europe cannot become an AI powerhouse through regulation alone.

A pressing question that does not receive nearly enough attention is why the EU, an economic superpower boasting the world’s largest GDP, has failed to produce any homegrown technology giants of note. Only two of the world’s 30 largest technology firms by market capitalization are from the EU. Rather than just focusing on regulation, the Commission must also address the more pertinent issue of why Europe is not at the forefront of the AI revolution.

In a recent parliamentary hearing on AI, Swedish MEP Jörgen Warborn warned that “the EU is severely behind when it comes to private-sector AI investment.” He is right. Over half of global private investment into AI goes to U.S. companies. Only 5 of the 100 most promising AI startups are based in Europe. Private funding for AI startups in Europe in 2020 stood at roughly $4B and was dwarfed by the US at $36B and China at $25B. As Warborn put it, “Europe has no AI ecosystem that can compete with regions like Silicon Valley.” As global competition in AI heats up, the EU is falling behind and ceding the playing field to the United States and China. 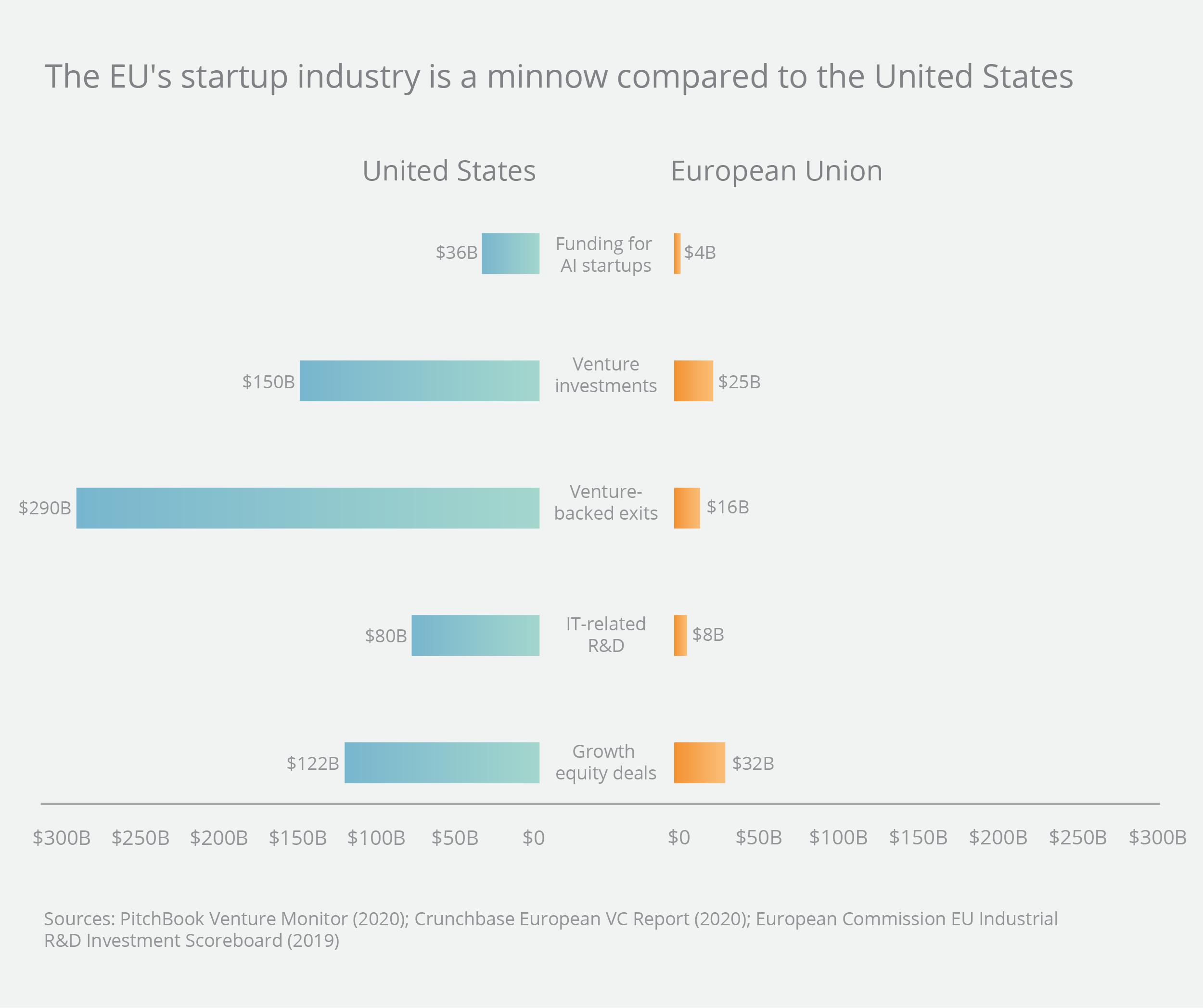 This problem, however, goes beyond AI and applies to Europe’s entire digital economy. Last year, the U.S. economy saw venture investments to the tune of $150B, compared to the EU’s $40B. Far fewer European technology startups go public or are acquired: Venture-backed exits came to a paltry $19B in Europe last year, compared to $290B in the United States. Half of global VC investments go to U.S. companies, one-third to Asia, and only 13 percent to Europe. On a per-capita basis, venture capital investments are almost seven times higher in the United States compared to France and Germany.

Rules and regulations alone do not create prosperity, and excessive regulation is making it difficult for European businesses to compete globally. The EU needs to decide whether it is content to be at the forefront of regulating digital technologies without developing them. If it is, staying with the status quo will suffice. If it is not, more needs to be done.

U.S. companies spend $80B per year on IT-related research and development (R&D), just under one-third of their overall R&D spending. By contrast, European companies invest $8B, a mere 5 percent of their total R&D outlays. Why is Europe so complacent about the fact that at the dawn of the AI age, which will generate trillions of dollars in value, its businesses are dramatically underinvesting in digital technologies?

Last month the Commission presented its vision of the Digital Decade, an investment program championed to bolster Europe’s digital competitiveness, which is welcomed. Ambitious announcements aside, the Digital Single Market is incomplete and European capital markets remain fragmented. As a result, the EU’s digital economy does not exist as a coherent entity. This matters, since scale is a boon for investment and growth, and market fragmentation is an obstacle. 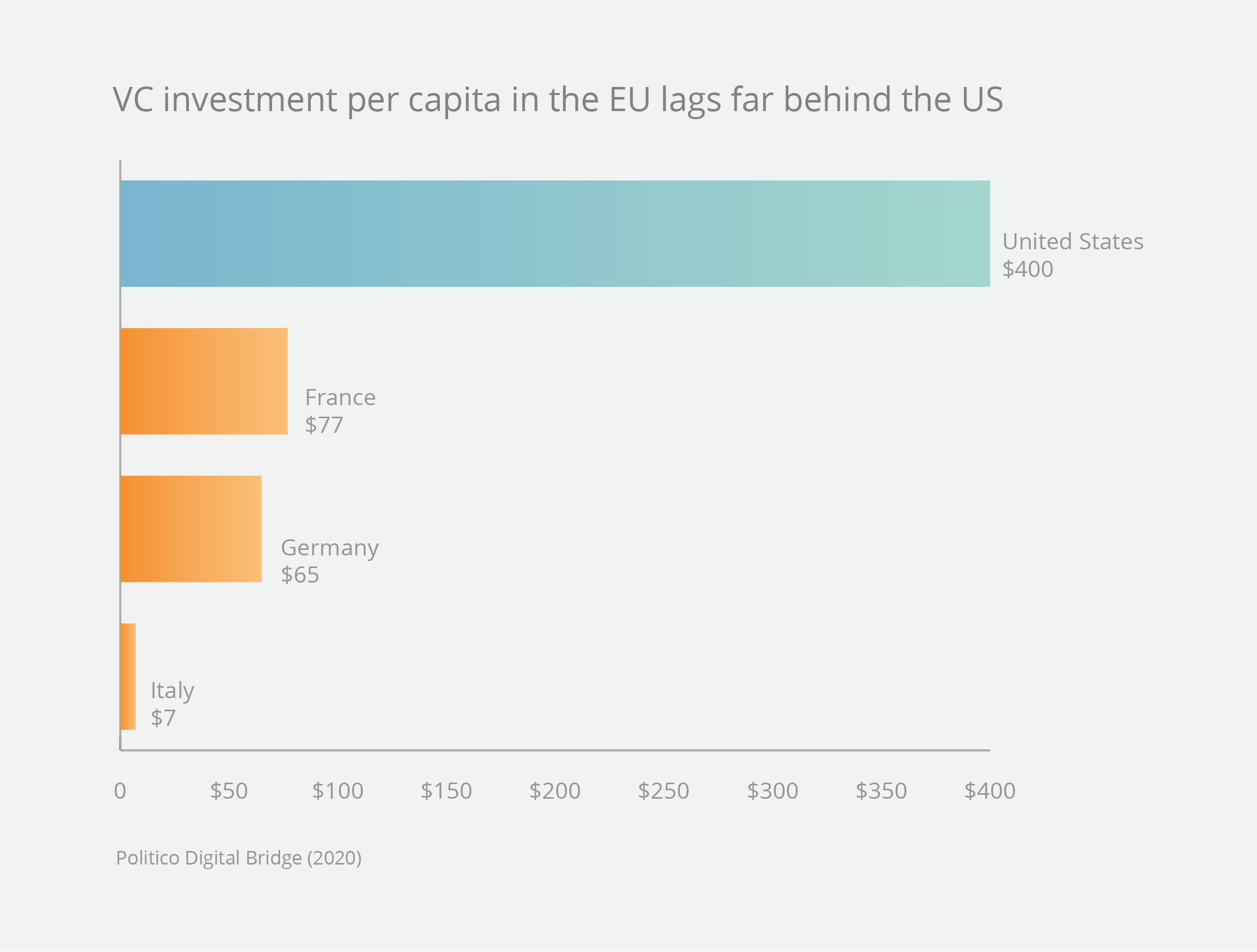 In this regard, the upcoming draft AI law is a chance to build a forward-looking regulatory framework that harmonizes rules across the EU. For that to be the case, the Trustworthy AI framework needs to spur private-sector investment and innovation rather than kneecapping Europe’s nascent AI industry. This means focusing on regulating specific use cases rather than a one-size-fits-all horizontal framework for all sectors. The EU’s flagship cross-sector digital legislation, the General Data Protection Regulation (GDPR), has severely impacted digital innovation and created major roadblocks in health research, for instance. Even one of its principal authors has recently called for an overhaul of GDPR. Far from being a competitive advantage, badly designed regulation is an obstacle to growth.

In order to prioritize the growth of private-sector investment in Europe’s digital economy, the Commission must also step up its efforts to deepen transatlantic trade cooperation on technology. A new agreement on cross-border data flows should be a top priority for the Commission, to make it easier for digital businesses to operate on both sides of the Atlantic. In the United States, a bipartisan group of senators wants to set up a new State Department body to align standards and increase mutual investments into new technologies, which the EU would do well to support.

In the debate around how the EU should regulate AI, Europe’s poor track record of private-sector investment into the digital sector needs to be foremost on policymakers’ minds. There is little point in writing European rules on AI if the proceeds of the technology flow outside of the bloc. Looking after consumer welfare is one thing, but the goal for any sensible politician should be to provide the conditions for sustainable growth. By neglecting to address the urgent issue of Europe’s lack of private sector-driven investment into AI, the Commission risks missing out on the biggest economic opportunity for decades. A regulatory innovator is not nearly as impactful as a technology innovator: For the EU to truly shape the future of AI it needs to have tech giants of its own. The future belongs to those who build it.

Benjamin Mueller is a senior policy analyst at the Center for Data Innovation, focusing on AI and technology governance. Prior to joining the Center he was chief of staff at a financial technology company in London. Dr. Mueller studied Politics, Philosophy and Economics at the University of Oxford, and completed his PhD in International Relations at the London School of Economics.

Visualizing the Impact of COVID-19 in U.S. Correctional Facilities

Higher Education Will Have to Adapt to Generative...

Innovation Should be the Priority as the EU...

Small Fixes Are Not Enough to Protect Free...

Policymakers Should Welcome, Not Fear, Pay-by-Palm